Rick Ross and his girlfriend, Brianna Camille have introduced their son to the world, after posting his pictures on social media.

The pair (American rap star and his girlfriend) who already have a daughter together welcomed their child, Billion Leonard Roberts, last month. Recall that in November, the rapper shared a tweet announcing the birth of his newborn child.

Proud mother of two, Camille shared the adorable photo of her baby and wrote: Mommy’s Pumpkin.’

The latest addition is Rick Ross’ fourth child. The rapper has two other kids, a daughter, Toie Roberts, whose mom is Lastonia Leviston and a son, William Roberts III, whose mother is Tia Kemp. 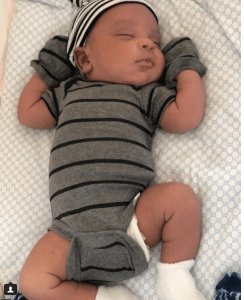