President Bouteflika Of Algeria Pulls Out Of Race For 5th Term

President of Algeria, Abdelaziz Bouteflika has announced his withdrawal on Monday from a bid to win another term in office and postponed an April 18 election, following weeks of protests against his candidacy, AFP report.

In a message broadcasted by national news agency APS, Bouteflika said the presidential poll would follow a national conference on political and constitutional reform to be carried out by the end of 2019. 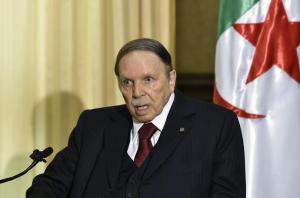