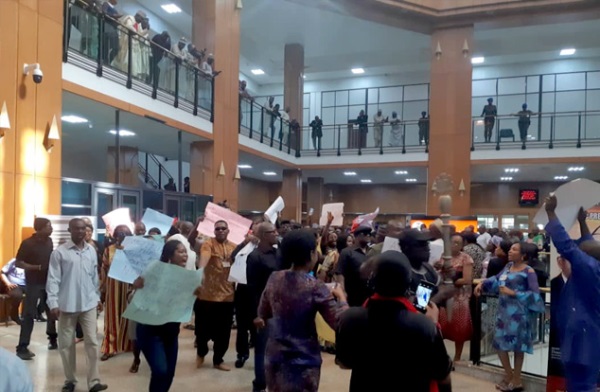 Protesting members of staff of the National Assembly (NASS) have blocked the Deputy Senate President Ike Ekweremadu from entering the Senate Chambers.

The workers are currently protesting what they said “is unpaid wages and lack of due promotion’’.

Some of the workers claim they are being owed wages from as far back as 2010. They also alleged that funds meant for training had been diverted.

Carrying banners and placards, some of the workers were heard chanting “no pay, no sitting”.

The workers, who are protesting inside the National Assembly also blocked the entrance into the legislative chambers.

When the Deputy Senate President, Senator Ike Ekweremadu, arrived at the Assembly, he was prevented from going into the Senate chamber with the workers chanting “no sitting”.

The angry workers also prevented him from addressing them.

The workers are also on a three day warning strike to protest non implementation of the Consolidated Legislative Salary scale.

They called for the immediate resignation of the Clerk to the National Assembly, Sani Omolori.

The Management of the National Assembly had on Monday urged the staff not to embark on the planned strike, saying that their concerns were being addressed.

The Clerk to the National Assembly, Mohammed Sani-Omolori, made this known in a seven-page letter addressed to the staff through the Parliamentary Staff Association of Nigeria (PASAN) dated Nov. 3.

PASAN at the weekend threatened to picket the National Assembly premises from Tuesday, Dec. 4 over non-payment of outstanding salaries and allowances of its members.

But Sani-Omolori expressed concern that despite efforts by the management to address issues raised by them, they still insisted to embark on the planned strike. (NAN) 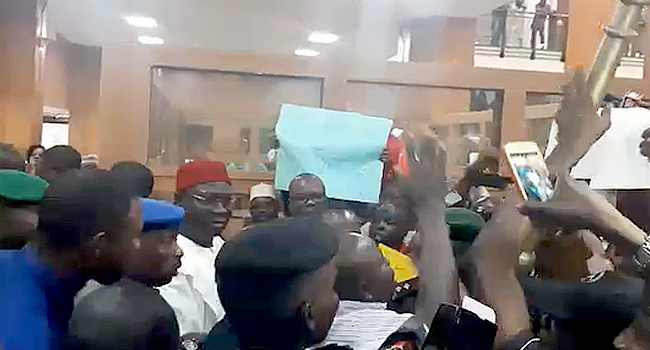