The family of Muyiwa Olushola is in mourning after the computer programmer allegedly committed suicide by taking a drink suspected to be laced with an insecticide, Sniper, at Mosadolorun in the Iba Local Council Development Area of Lagos State, the Punch report.

Neighbours revealed that the deceased’s mother had gone for a vigil, leaving him at home with his father, Segun, and sister, Tosin, when he suddenly started screaming for help around midnight, but efforts to immediately gain access to his room proved abortive, PUNCH Metro gathered. 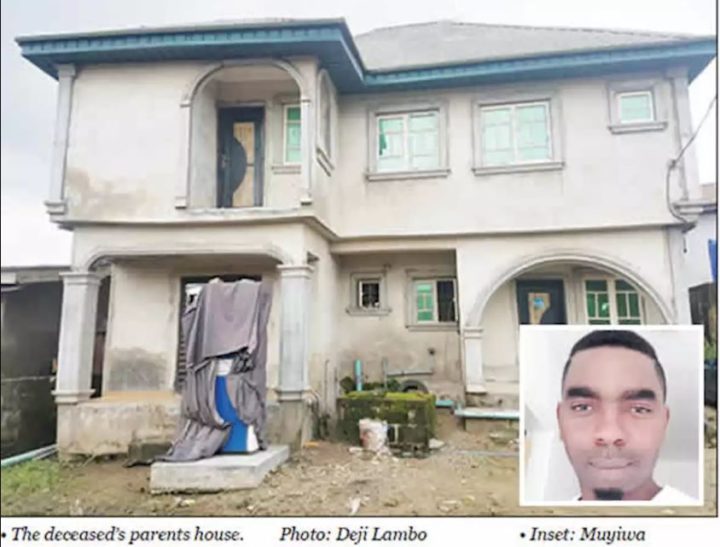 Eventually, the door to the room was broken and upon entry, Muyiwa was seen lying unconsciously on the floor with a foamy substance coming out of his mouth.

The 33-year-old was reportedly rushed to hospital for medical aid but gave up the ghost on the way.
Investigation was said to have revealed that the deceased allegedly consumed a drink suspected to have been laced with Sniper, as a bottle of an alcoholic drink, two bottles of the insecticide and a cup were found on the floor of his room.

When our correspondent visited the area on Tuesday, it was observed that the house, where the deceased lived with his parents and sibling had been locked.
One of the neighbours, who did not want to be identified, said the scream of Muyiwa’s father and his repeated banging on the door alerted her and others to the incident, adding that it took about an hour before anybody could gain access to the deceased’s room.

“Around midnight on July 1, I heard Muyiwa’s father screaming his name and asking him to open the door, so I quickly alerted my husband, who calmed me down saying the noise could be due to a minor issue.
“But when the man continued screaming and banging on the door, we had to rush out to find out what was happening, and when we got to their apartment, we saw the father trying to force his way into Muyiwa’s room.

“The sister, Tosin, said they were inside when they suddenly heard the deceased screaming for help, but they could not enter his room, because he had bolted it from behind. It took over an hour before the door was opened and we saw Muyiwa lying helplessly on the floor and vomiting a foamy substance. We also saw an alcoholic drink, two bottles of Sniper and a cup. From what we gathered, that was the mixture he drank.”
A resident of the area, who identified himself simply as Kamoru, said Muyiwa’s death could be linked to depression, adding that the incident had prompted his family to temporarily relocate to another location.
Kamoru stated,

“Immediately the family members saw him on the floor, they quickly rushed him to a private hospital around Iba, but the doctor on duty referred them to the Igando General Hospital. They were on the way to hospital when he gave up.
“I heard that he did not eat the food they gave him the previous day. I think he was depressed because he had been under a lot of pressure at home.”
A close friend of the deceased, Babajide Adekunle, said Muyiwa had just been granted a Canadian visa and was scheduled to travel in October before his death.
Adekunle said,

“He went to Cyprus for his master’s and obtained a visa to travel to Canada recently after being denied on two previous attempts. We learnt that he was supposed to travel in October; we are really unhappy that he took that kind of decision. He told us that his parents had been frustrating him at home and he decided to leave the house, but his mother disagreed with the idea.
“He had even rented an apartment, but instead, the parents suggested that he should stay in another house that they built. They were overprotective of him, because he was their only surviving son after his younger brother, Seun, died some years ago. Now, he is gone and they are left with only Tosin. May God give them the fortitude to bear this loss.”
Efforts made by our correspondent to get the Lagos State Police Public Relations Officer, Bala Elkana, to react to the incident, proved abortive as he did not pick several calls made to his telephone line, while a text message sent to him had not been replied as of the time of filing this report.