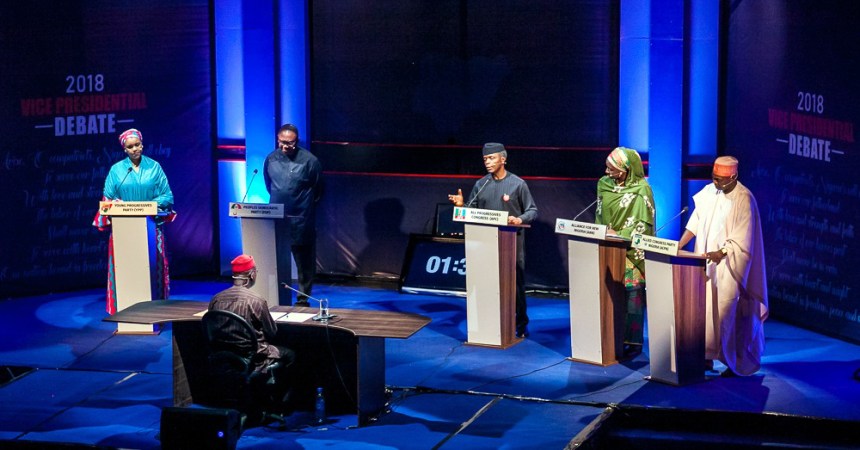 A debate was organised on Friday for vice-presidential candidates in the 2019 general elections by The Nigeria Elections Debate Group (NEDG) and the Broadcasting Organisations of Nigeria (BON).

The five candidates who participated in the intriguing debate outlined their plans for the country and answered critical questions about the state of the nation and its future.

An independently administered multi-stage process led to the selection of the political parties that partook in the debate.

Channels Television is here with has compilation of 20 of the top quotes from the vice-presidential candidates, comprising four from each person.

Read the quotes below;

We are at a critical stage in the life of this country. We should open our eyes and Nigerians should vote for candidates based on the manifestoes that they are presenting to them.

Unemployment is becoming higher and this is because of the wrong policy of government. The Nigerian economy now is vulnerable and can collapse at any time.

The issue of Ajaokuta (steel company) has been there for a very long time and it has been fraught with corruption, and now a drain pipe to the nation’s economy.

I believe that we should all be concerned about the plight of children in Nigeria and that is basically securing the future of our children, our future.

Poverty has become endemic in every aspect. Despite all the efforts the government has put in, we are doing a complete overhaul.

We all have experienced first-hand the pains of the last four years brought upon us by that runs a government. What Nigeria needs is freedom from this bondage called the cabal.

If you say investments haven’t taken place in years, who has been in office these last 16 years. Why we are where we are today is because of 16 years of mismanagement of resources.

If you allow criminals to steal all the inventories in the shop, there will be no shop.

let me say that there is no way we can minimise what has happened; you can’t minimise corruption. If you minimise it, we run the risk of completely.

We cannot do what we want to do unless we are able to minimise corruption or eradicate it completely.

You are not creating jobs, you are not doing the right thing, and you are just fighting corruption. You can’t shut down your shop and be chasing criminals.

As long as we don’t create jobs and have the number of unemployed youths in their productive age that we have today, we are going to have crisis.

Fighting corruption is not an economic policy, it is not that you can’t fight corruption, but you can fight it more aggressively while addressing economic issues.

The number one problem of this country today is its economy. The vice president is in charge of rebuilding the economy to where it can create jobs.

To be candid, subsidy to a typical Nigerian is just a scam. That’s how I will call it, the way President Buhari once said in the Newspaper.

I have a passion for the girl child education and I spent the early years of my adulthood in the development of a common Nigeria.

In my party (YPP), we so much believe in a new Nigeria, where every Nigerian will have equal rights and will have a story to tell tomorrow.

There is no other party in Nigeria that has given priority to women. Professor Kingsley Moghalu’s Presidency is about giving 50-50 opportunity to women to participate in his government at all levels.